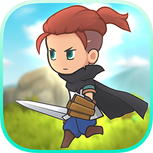 A thousand years ago, a war broke out among the races in the mortal world in order to fight for resources and territory. The long war lasted for 10 years. The Kittie could not stand the long war, so they summoned the Demon Lord of the World of Chaos in the hope that they could be the final winner. The Humans and the Ratties followed suit to fight against it. It was only inevitable that those who wanted to use the power of evil would eventually be swallowed up by darkness, and the world would be plunged into chaos. At this same time, five Emblem Heroes were born, and a battle between light and darkness began. After a fierce war, the Demon Lord was sealed on a small island. The five Emblem Heroes became kings of their races.

Kelmster, the island where the Demon Lord was sealed, was thought to be uninhabited, but it turned out a group of residents were living here. The abandoned race used to be scared and helpless. Then, they began to worship the Demon Lord and regard themselves as the servants of darkness.
Hundreds of years passed, and the son of the Demon Lord was born. This marks the beginning of the dark's revenge against the Emblem Heroes...

​A New Chapter of the Night Chasers

A long time ago, there used to be a mercenary group called the Night Chasers. Instead of making money, they went around helping people in need. During the war, they helped many people who were suffering. However, with the advent of peace, the Night Chasers were no longer needed and had to disband. But four young people, Zack, Lucien, Sid, and Odelia, decided to carry on their spirit and formed the new Night Chasers.

In a mission, Zack and his party accidentally saved an elf girl named Dolores, but she couldn't remember anything. Sid worried so much about this girl who traveled far from the Elf Kingdom to the humans' territory. However, this is only the beginning of nightmare for the Night Chasers!

A new evolution of Match-3, combat, and adventure!

Hero Emblems is a Japanese-style game that combines RPG and match-three gameplay. In its sequel, you will enjoying a more thrilling and more difficult adventure with richer content.
​

The basic goal of the game is to remove three identical Emblems on the screen by swapping them.Heroes will make moves accordingly.Remove more Emblems so that the heroes can make more moves.